Yes we can. That may be what Republican Presidential candidate John McCain’s camp is saying right now about narrowing the race online that is completely dominated by Democratic candidate Barack Obama. To be clear: Obama is still far ahead of McCain in terms of online visibility, but it appears to be less lopsided. The reason? The Internet as a whole may have gotten a little sick of Obama in the past month, according to analytics company Compete.

On the two candidates’ websites, Obama saw a drop of 28 percent in traffic over the last month, Compete’s numbers show. During the same time, McCain saw a rise of 3 percent. Again, to be clear, Obama’s traffic is still more than double that of McCain’s, but a 28 percent drop is significant.

Candidate FaceTime, which measure the total time voters spent online with each candidate through various popular sites, is an even more compelling chart. It shows that while Obama controlled 92 percent of the online FaceTime in May to McCain’s 7 percent (Ralph Nader had 1 percent), in July Obama “only” had 73 percent while McCain surged to 26 percent.

While McCain takes quite a few hits for his lack of computer prowess, his campaign is at least starting to understand that it needs to use the web in a successful 21st century campaign. McCain’s use of YouTube might not be as trendy as Obama being the most followed user on the micro-messaging service Twitter, but YouTube’s reach goes far beyond that of Twitter, which most of the country has never heard of still. 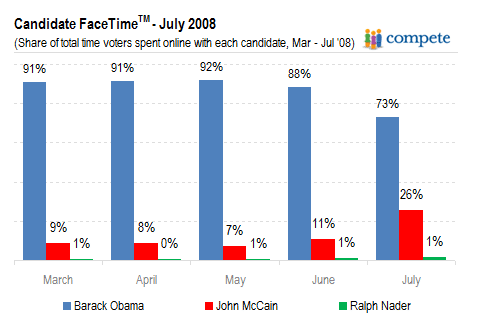 Celebrity heiress Paris Hilton making fun of McCain in a recent FunnyOrDie video (embedded below) may have also helped his online visibility. There is no such thing as bad press, especially online, after all.

More seriously, McCain also recently laid out his own tech policy proposal, something which people had been waiting for since Obama did the same last year.

The narrowing gap online is also at least somewhat reflective of recent voting polls, which suggest McCain has cut a once double-digit deficit to within the margin of error (meaning it’s a virtual tie as to who would win the election if voting was today).

This entry was posted on Thursday, August 21st, 2008 at 12:40 pm and is filed under Uncategorized. You can follow any responses to this entry through the RSS 2.0 feed. You can leave a response, or trackback from your own site.